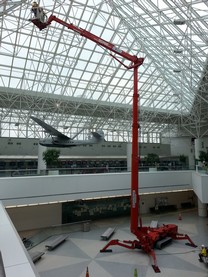 When it comes to indoor traffic, few spaces have the high volume and pace of a major international airport. Thousands of people move through in a single day, and the idea of interrupting the flow is simply bad for business.

This was the challenge recently faced by Baltimore/Washington International Thurgood Marshall Airport (BWI Marshall) in Maryland. The facility managers needed to complete a structural steel inspection of the roof in several areas, and the most problematic was in the international terminal. Not only does this section of BWI Marshall have limited access through relatively narrow double doors, the atrium ceiling height is up to 90 feet. To accomplish the job, the only solution was to find a lift compact enough to fit through the terminal's double doorway, light enough to traverse the floors, flexible enough to move around with ease, and tall enough to reach the 90-foot ceiling all while minimizing disruption to the traffic pattern of passengers moving between terminals seven days a week.

"Scaffolding is always an option, but the setup time and the inconvenience factor are huge," says Mike Bruns, sales representative for United Rentals. "This required a compact lift that would allow workers to get in, do the job and get out. Most lifts were either too heavy for this job or wouldn't have the ability to reach this height. I knew Teupen would have just the right machine."

Working with Teupen is nothing new for Bruns, who says he has rented every one of the company's compact track lift models at different points in his career. For the BWI Marshall project, Bruns recommended the Teupen TL123AX to Brett McElwain, project manager for bridge structures at AECOM, the firm contracted to conduct structural inspections at BWI Marshall.

"We've done work at the airport, but we have never performed a hands-on-inspection of the atrium area in the international terminal, and we had about three days to complete it," McElwain explains. "The rest of BWI has lower ceilings, maybe 50 feet, but for this section, the ceiling height is almost double because it has a large atrium. Our workers needed to take equipment up to the ceiling to inspect the truss members and connections, and to look for evidence of corrosion. We wanted to be sure they felt secure when doing their work at this height."

McElwain says the Teupen lift met every unique requirement of the job. It fit through the terminal's entrance doors, which airport workers had to remove to provide a few more essential inches of clearance. It didn't exceed the floor load rating of 115 pounds per square foot. It used electrical power, eliminating the need for a diesel generator which would have emitted fumes into the terminal. It was able to navigate the space with ease, even moving around a large model airplane suspended from the ceiling. It had a maximum working height of 129 feet, allowing it to easily each the atrium apex. And it caused minimal disruption to the day's normal traffic flow, although several passengers stopped to gawk at the spectacle of the Teupen machine in action.

"What was most amazing about the Teupen lift is its reach," McElwain says. "We only had to move to three different spots to complete the full inspection of the atrium portion of the terminal. This was the first time I'd operated a unit like this, and it was surprisingly easy to control. The guys working up at the ceiling said everything felt very steady compared to other lifts."

McElwain adds that completing the project in three days would never have been possible with traditional scaffolding. "It just took one day to move the Teupen unit in, two days to inspect, and we were out of there," he says.

Speed of operation was also important to getting the Teupen lift into the terminal in the first place. "It was quite a scene unloading the machine," Bruns says. "We had to shut down an entire traffic lane in front of the terminal, which as you can imagine was an issue with such a busy airport. We had something like 40 airport employees watching as we unloaded. But we did it all in an hour, exactly what we estimated."

For Bruns, the BWI Marshall experience was another in a long list of successful project partnerships with Teupen. "At any point during a job, I know I can pick up the phone to get an immediate answer," he says. "David Kesser and his team at Teupen are great at helping clients plan and execute, and they provide the proper training to ensure the safety and success of every project. The lift equipment is excellent, and so is the service."

The Teupen team is proud to hear these positive comments, because we work hard to build relationships that continue job after job, year after year. To learn more about the depth of our products (covering working heights from 35 to 156 feet) and the value we can bring to your next job, please get in touch with us today. We are here to assist in specifying the right machine for your project and will put you in contact with the closest sales or rental center.