Get To The Root Of Insect Infestation

The smallest problem can pose the biggest threat to healthy trees. When tiny insects grow in quantity and cause a full-scale infestation, it may take years to correct the damage. At Teupen USA, we are encouraged that our tree care clients are getting in front of the insect problem by helping to prevent it in the first place.

As a prime example, the emerald ash borer (EAB) poses a major threat to ash trees. The EAB is an Asian beetle, metallic green in color that was first reported in the United States in the early 1990s. This pest has spread across the eastern U.S. as far south as Georgia and continues to move west. Tens of millions of ash trees have been killed by the EAB in 22 states to date, and billions of other trees are at risk from EAB infestation. 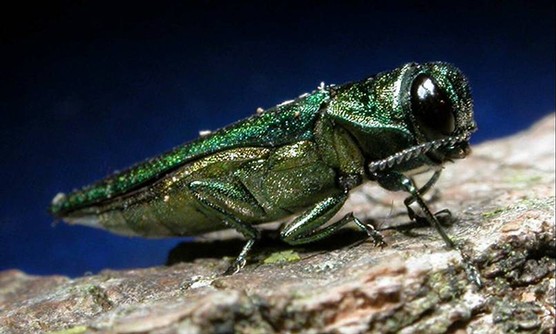 How does the EAB cause tree death?

Adult beetles initially lay eggs in the bark of an ash tree. When the eggs hatch, the larvae enter beneath the tree bark and feed on the tissues of the tree, cutting off the vessels that conduct water and nutrients. This is a fungal infection similar to Dutch elm disease. For an infected ash tree, up to half the branches can be dead within a year, and most of the canopy will be dead within two years. The problem is compounded by the fact that EABs can fly up to half a mile from the tree where they emerged, starting the infestation cycle all over again.

What are the signs that a tree has been infested?

Trees under attack by EABs will start to thin above the infested portions of the trunk and branches. When adult beetles emerge from the tree, they leave a "D" shaped exit hole in the bark. In addition, EABs lying below the bark cause a marked increase in woodpecker activity.

The EAB problem is especially significant because the ash is a popular tree variety, very prominent in urban and residential areas. Awareness and prevention are the most important things to communicate when consulting with customers who have ash trees on their properties.

What can be done to prevent infestation?

The best place to start with prevention is using insecticides on ash trees that have not yet shown signs of infestation. Being proactive may take a bit of convincing for some customers and a thorough presentation of the facts and the threats. For many customers, there's no sense of urgency until a tree is dead or is showing signs of dying. Customers need to realize that the initial cost of an insecticide treatment is far less expensive than removing dead trees. In some cases where infestation has already occurred, it may be possible to stem the tide, but usually it's too late. Once the canopy starts to thin, the EAB has likely already caused extensive damage to the tree that can never be undone.

The insect problem is constantly evolving. In the Midwest, for example, the recent appearance of the Asian longhorn beetle poses a threat to seven varieties of trees and has the potential to cause even more devastating damage than the emerald ash borer.

Teupen is pleased to be associated with tree care professionals who are at the forefront of education, identification and treatment of invasive pests. Without these diligent industry leaders, the damage caused by EAB and other insects would be spiraling out of control. For tree care companies in areas currently unaffected, it's critical to constantly monitor the threat of new insect infestations and to be knowledgeable and persuasive when consulting with customers. It may be common sense, but the most effective way to combat a problem is to prevent it before it can start.