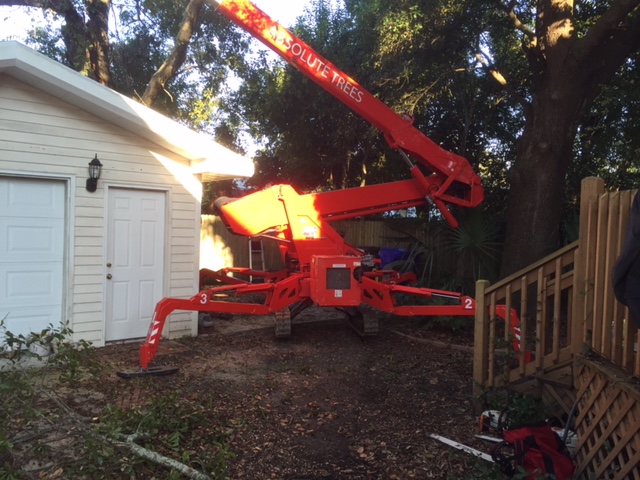 The historic beauty and charm of Charleston, South Carolina is known around the world. Visitors flock to the cobblestone streets to view the stately homes in a downtown area that has been designated a National Historic Landmark and was once one of America's largest, most metropolitan city centers. While the location is perfect for tourists to stroll, it poses a real challenge to anyone needing to work around downtown Charleston's narrow streets and driveways and close-set homes.

Troy Hopkins encountered just such a problem in the summer of 2015. As the owner of Absolute Trees, based in South Carolina's Lowcountry, Hopkins was contracted to remove the fallen limb and remaining damaged portion of a 200-year-old oak tree in a homeowner's backyard. The tree was so large, and the home lots were so packed together, that the downed portion spanned four properties, each roughly one-tenth of an acre.

"My company works in this area all the time, so we know about tight quarters, but this was about as tight as it gets," Hopkins explains. "The driveway was too narrow to back in anything like a bucket truck or a crane, or even our wood chipper. The only thing that would fit was my Teupen lift."

Hopkins made the decision to purchase the Canopy Series TC69A compact lift (formerly called LEO23GT) from Teupen earlier in the year, after hearing about the company and scheduling a demo to operate the machine. "I use the Teupen lift almost every day, and it was perfect for this job in downtown Charleston," he says.

The issue was not only limited access, but safety as well. Hopkins says the tree one of the many old majestic oaks of Charleston had literally split in two. "Because of the split, we couldn't tie off into the remaining limb as we normally do, so we didn't want to send up a climber. There was no way to tell how strong the limb would be, and with the way the climber would need to position his body, he would always be at risk."

Hopkins adds that the limb showed signs of significant decay, making the entire tree hazardous to remove no matter how his crew approached the job. "The Teupen lift was the safest option by far," he says. "My crew member stayed in the lift, away from the rotting and split pieces of the tree and out of harm's way."

The Teupen compact lift helped Hopkins avoid risking the safety and well-being of his employees, which he says is the ultimate benefit. "The Teupen lift was the best tool for this job," he says. "None of the other equipment we have could have worked as efficiently and safely as this lift did."

In addition to praising the versatility of the Teupen model, Hopkins gives high marks to the lift company for exceptional service after the sale. "Everyone at Teupen has been great, and they go above and beyond," he says. "I had a service issue that went beyond the warranty date, but they took care of things and continued to honor the warranty. They always do what it takes to make sure I'm a satisfied customer."

At Teupen, we value such comments and are proud to support Absolute Trees and other quality tree care companies by providing equipment that makes operations as trouble-free as possible and work environments as safe as they can be.

The Teupen lift sounds like the right tool for the safety conscious company.