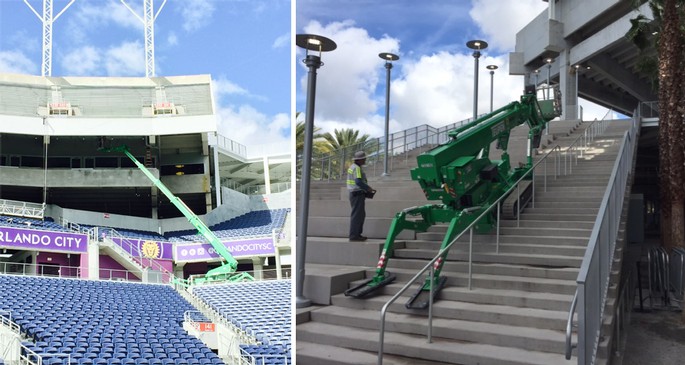 There have been many jaw-dropping feats of strength and performance at the Orlando Citrus Bowl in Orlando, Florida. One of the most unusual recently occurred off the field.

Like most modern stadiums, the Citrus Bowl is designed on a large scale. The upper decks have a steep rise and extend far over the sections beneath them. This requires precise planning and coordination between facilities managers and maintenance crews when modifying lighting or electrical systems, or replacing stadium-sized sponsor signs.

For Gabe Park, the challenges kept multiplying on a recent project. Park is Senior Director of Business Development for Florida Citrus Sports, the main tenant for the stadium which is owned by the City of Orlando and operated by Orlando Venues. He and his team needed to run electric to a new sponsor sign. The location was difficult to reach because it was on an upper level with a deck hanging above it and could only be accessed by traveling up a series of steep and relatively narrow stairways. The timing was tight as well only one day to complete the job.

"We were scratching our heads over this one," Park explains. "We had just gone through a complete rebuild of the stadium. During construction, it was fairly easy to move heavy equipment in and out. However, a year later, we sold an additional permanent fascia sign to a major partner and this meant we had to navigate the new stadium layout."

Park says he and his staff considered using a traditional lift for the job, but it wouldn't be capable of accessing the stairs leading up to the area. Traditional scaffolding was also ruled out as being too expensive and too time-consuming.

That left one solution: a compact track lift.

Park contacted Nolan Reid, his account manager at Sunbelt Rentals in Orlando. Reid had worked with Teupen for many years on numerous jobs throughout South Florida, and he was confident he would find the right aerial lift to address the Citrus Bowl's unique access challenges.

"It was really the craziest spot to do any work, so it fit every Teupen requirement," Reid says. "There were narrow doors to travel through, a staircase to climb up, a low entrance to clear and a major height to reach, all in a single day. Scaffolding might have been possible if there had been enough time; but it would have cost thousands of dollars more because of the man hours, and it would have taken days rather than hours."

Instead, the Teupen TL92SJ rolled in one morning, ready to do the job. The clock was ticking, as the Mayor of Orlando was scheduled to deliver an address at the stadium that evening. "As you can imagine, a lot of nervous people from the city's operations department showed up to watch the whole thing," Reid says with a laugh. "Frankly, this was all new to me too. I've always had success using Teupen lifts over the past 14 years, but never on a job that had this many stairs to climb--more than 100. There was a lot of nail-biting that day."

The mood changed from apprehension to excitement as the Teupen machine traveled up 150 feet of stairs, extending its front and rear outriggers straight ahead and behind to stabilize itself during the journey. Once on the plaza level, the lift moved easily under the low overhang of the entrance and was stationed to extend 90 feet in the air, allowing the operator to wire and install the sponsor's new sign underneath the deck above it.

Finally, the Teupen lift needed to go back down the way it came up, one steep set of stairs at a time. Mission accomplished! In all, the job was completed during a normal workday, clocking out at 5:00 p.m. in time for the Mayor's address.

"I wasn't surprised at all that Teupen did a perfect job," Reid says. "As complex as the conditions were at the Citrus Bowl, there was no damage, no scuff marks, nothing. Teupen provided top-notch service and talked us through the details at every step. Now I know for sure that Teupen units can handle not only height and width issues, but steep climbs as well. The versatility is pretty amazing."

The Teupen team appreciates partnering with rental clients, like Nolan at Sunbelt Rentals, and end-users alike. We also welcome any and all challenges. If you have especially difficult areas to access at your facility, please get in touch with us to learn more about everything that's possible with a Teupen compact track lift.